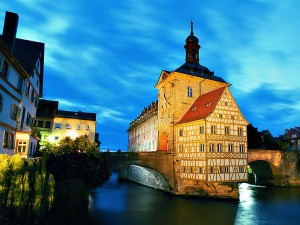 Scenic Cruising & Included Bamberg City Tour . This morning, sail through the 106-mile Main-Danube Canal, an engineering marvel stretching from Bamberg on the Main River to Kelheim on the Danube and comprising 16 locks. Originally envisioned by Charlemagne in the 8th century, this waterway was finally completed and opened in 1992, creating a continuous waterway from the North Sea to the Black Sea. Arrive in Hassfurt around lunch and disembark for a tour of Bamberg, with its medieval city center, a UNESCO World Heritage Site. Your walking tour includes a visit to the magnificent 11th- century cathedral, reworked in late-Romanesque style in the 13th century; this is where both Emperor Henry II and Pope Clement II are buried. You also see the very picturesque city hall built on a tiny island in the middle of the Regnitz River near its confluence with the Main. Take some free time to enjoy Bamberg and sample some of the town’s distinctive smoke- flavored beer before rejoining your ship in Bamberg in time for dinner aboard as we depart.
Included Meals: Breakfast, Lunch, Dinner